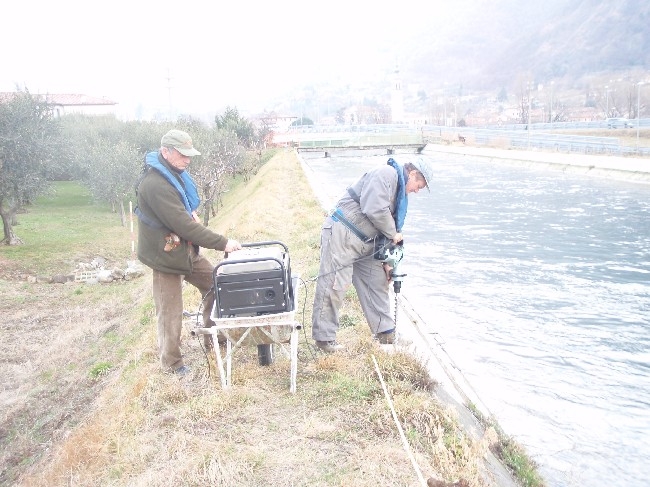 Numerous irrigation canals are fed from the waters of the river Brenta both on the right and on the left hydrographic. The surrounding countryside requires large quantities of water for agricultural crops given the considerable permeability of the gravel soils in the area. There are ancient irrigation ditches built at the time of the Serenissima Republic and the oldest, the Roggia Molina, dates back to 1311. Among the most important there are the Isacchina, Balbi, Cappella, Trona-Michela and Grimana irrigation ditches. It is a very complex hydrographic system and a very particular ideological environment. The rogge are in fact all given and subjected to a series of interventions throughout the year, interventions that influence the status of their biological communities. The expulsion operations that are carried out periodically and in the same way for all the irrigation ditches are essentially of two types: the draining of the watercourse in certain months of the year and the mowing of the aquatic macrophytes. The irrigation ditches that flow to the right of the Brenta pass through mostly poorly populated agricultural areas and, even if some pollution phenomena are evident, the quality of their water can be considered discrete. The irrigation ditches on the left Brenta have less natural seabeds and receive the discharges of the inhabited or industrial centers that cross; the quality of the water is not good and the effects of the pollution are clearly visible.

To know all the activities of the Pedemontano Brenta Reclamation Consortium, read below.

The sources of the irrigation samples are the waters of Brenta and those coming from the springs; these are sites where groundwater surface, real natural springs, which form rivers and environments of exceptional value. The irrigated area covers about 30,000 hectares. Already 6,000 of these have been converted from traditional sliding systems to more modern rain systems, in order to save water in times when it is increasingly valuable.

To reduce energy costs, which are very expensive considering the high number of pumping plants, the Consortium has two hydroelectric plants located in Bassano del Grappa. These plants produce 11 million kilowatt-hours per year; it is clean energy, from a renewable source, with advantages not only economic but also environmental.

The hydraulic reclamation in the district is mainly natural drainage, except in some southern basins, equipped with mechanical lifting. One or more times a year it is necessary to clean these manifolds carefully, where possible by mechanical means, otherwise manually. There are also hundreds of hydraulic products (siphon barrels, spur gates and emissaries, supports, gauges, defense works, embankments, bridges, bridge-channels, partitions, spillways, bottom jumps, slides, grilles, debris, drainage, drainage and lifting systems). They are also subject to maintenance and continuous renewal.

The evolution of the territory:

The urbanization during the last years, which took place with great impulse and often in a disorderly way, has brought out new problems with the drainage of the waters; in fact, an urban area contributes 10 or 15 times more than the flow rates in watercourses, compared to an agricultural area. The existing drainage network has therefore proved to be insufficient in many cases and new works are needed to ensure hydraulic safety in an area now at risk. The Consortium is very committed to designing solutions and implementing new interventions, in this case with public funding, where available, given the aims of collective interest.

The apparatus is made up of over 80 employees, most of them working in the various work sites, or in continuous movement for the operations on the numerous maneuvering organs and the control of the various plants. The territory is subdivided into 14 homogeneous zones, each entrusted to an overseer, who has the task of monitoring the canals and everything that is built in the buildings, to organize the maintenance and to carry out the hydraulic maneuvers, both in the summer, during the irrigation, and during flood events. The remaining staff consists of specialized teams of intervention on canals and artifacts, with organization similar to a company, with the use of a modern fleet of machines: guided by the employees, there are 9 excavators (equipped with special buckets for expurging and the weeding of the ditches), 2 backhoe loaders, 6 tractors, weeders, 9 motorboats weeders (for the mowing of algae in the presence of water), 14 trucks, 27 cars, as well as various construction equipment. For emergencies are then available 4 generators and three mobile electric pumps. The working power of the operating machines is about 4,900 horses. If the presence of trees, buildings and fences along the banks prevents the transit of the machines, manual intervention is necessary, longer and with greater charges. For these activities recourse is made to adventitious personnel, who performs maintenance of the channels from the inside, especially during the dry season. The workforce is completed with the planning and project management office, which follows the extraordinary works, with the land registry office and territorial information system, which tracks the updates of the properties (over 100,000 users) and the collection of taxes, in addition to the computerized cartography, with the personal office and accounting office, which takes care of the administrative accounting and services related to employment relationships and with the secretary office, which deals with the general affairs (insurance, legal disputes, resolutions, archive and protocol, etc…).

An emergency surveillance and coordination service has been set up, which can be contacted during all 24 hours, through the toll-free number 800-234741, assigned to a technician available. At any moment, he is able to activate personnel and means adapted to the case, with the possibility of having operating machines or anything else needed in situations of hydraulic emergency.

The reclamation fee is spent entirely in the district, for the benefit of those on the territory itself. The institution is administered by members elected by users among users, with a large representation of local communities. The contribution is established on the basis of a special repayment plan prepared by the Consortium and approved by the Region. It provides that all property owners participate in the costs of maintenance and management of channels, plants and manufactured goods, based on the benefit, which has been assessed through certain parameters (network length, intensity of works, operating costs, energy costs, types of soil) in the various homogeneous zones.