Mostra versione desktop
You are here: Our Association » History and origin 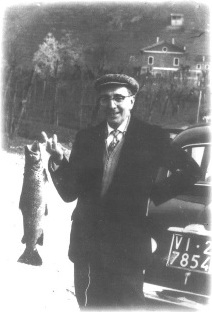 The Fishermen's Association of Brenta Canal, the oldest fishing company in Valbrenta, was founded in 1969 as a "Fishing Reserve for public water concession for ichthyological purposes" by a group of passionate fishermen animated by a deep love for the river , with the precise purpose of safeguarding it from a fishing without rules, exercised by all means, including fishnets, which saw it depleted day after day of its precious fish heritage.

Among the first promoters we can remember Vettore Vettroi, true historical memory of the Company, together with Aristide Stefani, Sergio Sebellin and many others. The members, initially 700, became 3000 during three years, and they came not only from all the Vicenza area, but also from the high province of Padua and the neighboring province of Treviso. The Concession was conducted with authority and expertise by the Board of Directors, which included representatives of all the riparian municipalities and was presided over the whole of its existence, by the president Paolo Fontana.

The organization, very efficient, could count on over 40 overseers, all volunteers, and at the meetings of the Members, which took place at the Cinema Verdi in Carpanè, flowed on average 500 members: there were many battles in progress at that time, before all, the one against pollution.

Later, due to management difficulties caused by too many misunderstandings between the representatives of the various riparian zones, the Concession was revoked and inserted between the competences of the Region with delegation to the individual Provincial Administrations, so the historical "Canal di Brenta" became the current "Brenta River Water Basin".

The "Canal di Brenta" Association, an organism now without a function, survived by statute, and was officially dissolved only in 2005, allocating the remaining funds to the "Città della Speranza" foundation. Therefore, it is the current task of the "River Brenta Water Basin" Association, to take care of the management for the sporting and recreational fishing of the concession by proxy of the Provincial Administration.

The subject of the delegation is currently the waters of the River Brenta together with all the tributaries and emissaries, including all the irrigation ditches connected to it, flowing in the Province of Vicenza, on the basis of a Disciplinary of Concession and in compliance with the indications contained in the Fish Charter, in particular - …. (omissis) ....... implementing the cultivation of water based on the increase in the natural productivity of aquatic ecosystems, biological rebalancing and maintenance of the original genetic lines of fish species.